Posted on December 30, 2013 by NewEnglandGardenAndThread

In previous years, Christmas presents involved Santa and numerous trips to Toys-R-Us, local toy stores,  National Geographic for Kids, and other sources of interesting and challenging presents for children.

But, once children become eight and twelve and Santa is not part of the celebration, toys are not always at the top of their wish lists. There are musical instruments, music books, video games, CDs, chapter books, hobby materials, clothes, and of course they can always use a little spending money.

But, it wouldn’t be that much fun to just put some money in an envelope.

For my grandson’s recent birthday, I made a bow out of fourteen one-dollar bills, and he thought that was pretty funny. 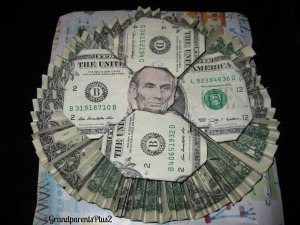 So I went back to Pinterest to seek some more ideas. It only took a few minutes, and I found what I wanted.

For my granddaughter,  a little smile and a chuckle plus some money for new 1Direction albums. Six five-dollar bills in a frame that said: In case of emergency, break glass. She got a good laugh out of it. My grandson thought I should have also included a hammer – of course he did. 🙂 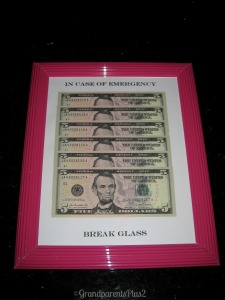 But, for my grandson, I needed a really big laugh because that is the kind of guy he is. A few weeks ago, he had a bad cold and used a lot of tissues while visiting. Before leaving, he remarked that he owed me some tissues. So, I chose the gag that used a tissue box. The look on his face when he started to pull a tissue out and thirty one-dollar bills kept coming out was hysterical. 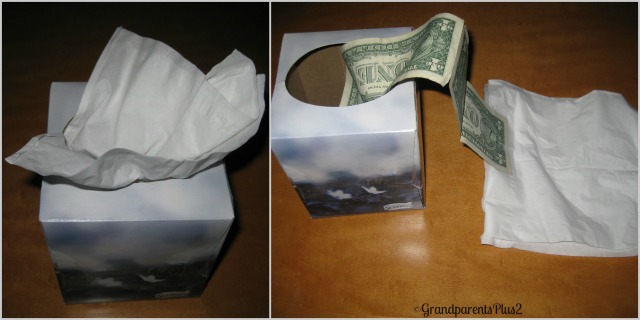 We had a really nice Christmas, and these two gifts provided the chuckle that I was looking for.

Here’s hoping you had a good Christmas and some laughs along the way too. 🙂