Posted on September 10, 2015 by Judy@NewEnglandGardenAndThread 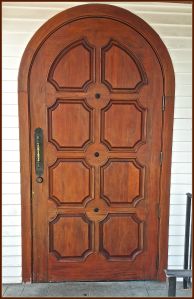 Here in my hometown, there is one priest and four Catholic Churches that were merged into one Parish.

St. Charles built in 1893 has been on the market for several years now. They hope to sell it, tear it down and build workforce housing.

Catholic churches have had to evolve since reaching the point where there are not have enough priests to staff all available churches.

Over 100 years after St. Joseph’s Church was built, it was reborn into a very popular seacoast Irish pub restaurant, Holy Grail, by David and Maureen Kennedy.

The stained glass windows, hanging light fixtures, pews, and even the baptismal font are still intact. Seeing a baptismal font next to a hostess stand was a little unnerving the first time. 🙂

The beautiful stairs ascending to the previous choir loft are in the background.

We’ve eaten there twice this summer and the secret is to ask for a to-go-box as soon as the meal arrives because portions are large.

This Thursday door changed from serving the soul of the community to feeding the local community – not a bad transition. 🙂

Note:  The Kennedys tried to buy St. Charles Church as well as a church in Methuen, MA, to create restaurants but were turned down by the Diocese. They were able to buy St. Joseph’s Church in Epping because it had been originally sold to a buyer with a business plan that was approved by the Diocese and then resold. This summer, the Kennedys opened the Holy Grail of the Lakes in the former Evangelical Baptist Church of Laconia. They have decided to pursue non-Catholic churches as they expand their business.