Posted on September 21, 2015 by NewEnglandGardenAndThread

Humbling. That is the one word that kept coming to mind as we toured Gettysburg National Military Park last week.

We’ve been to numerous historic sites, but the magnitude of this one is what weighs on you and you can’t quite wrap your mind around it. In this Valley of Death, 95,000 Union soldiers and 75,000 Confederate soldiers faced each other on a four-acre battlefield for three days in July 1863. Some fought barefoot and most only had a few grains of corn in their pocket to eat. 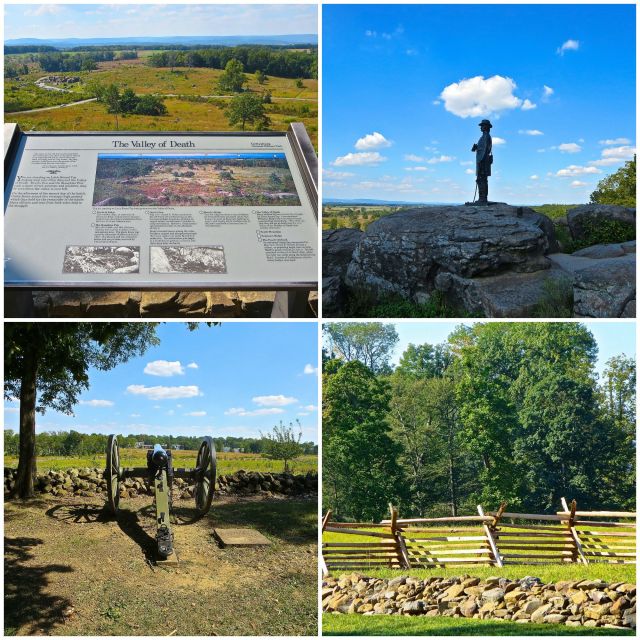 The Gettysburg National Park now covers almost 6,000 acres and nine square miles that are preserved to respect the human sacrifice made on these three days.

There are numerous ways to tour the battlefield including by horse, individual tour guide, several bus tours, bicycles and small cars or self guided auto tour with a book and three CDs. We chose the self guided tour and were very happy with it because we could stop and walk the fields, check the various monuments, climb to get a better view and just go at our own pace. There are over 1,300 monuments and markers throughout the park acknowledging individual and company contributions from various states. (Thank you Dan, Steff, and Jayne for your Gettysburg feedback.)

We spent one afternoon touring the first 15 of 16 stops, leaving number 16, the cemetery, for early the next morning. At the end of the Battle of Gettysburg, there were almost 10,000 dead in comparison to the number of citizens who numbered less than 2,500.

We arrived at Soldiers’ National Cemetery around 8 a.m. and were able to walk around with just a few others. It is a place that evokes such emotion I can’t really describe it. So many markers with no names but yet the site of such an important message to our Nation about the importance of being united.

After the cemetery, we visited the Gettysburg Train Station where President Lincoln traveled through. It is a lovely building with some original benches. As you sit there you can’t help but wonder those who sat there before you. 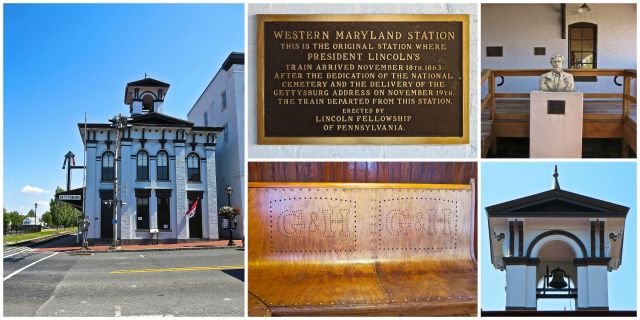 I took a couple of hundred photos and could go on and on about how much we enjoyed visiting Gettysburg. The bottom line is that if you enjoy history at all or have a relative who served in the civil war or a state that actively participated, I truly think you would like visiting Gettysburg.

It occurred to us that maybe the 25 or so candidates running for President in 2016 ought to climb on a bus together and head to Gettysburg. Maybe a tour of this historic site and rereading the Gettysburg Address might put a few things in perspective and they could walk away thinking more about “…government of the people, by the people, for the people, shall not perish from the earth.”

I’ll post about the town and the breweries in another post. It didn’t seem fitting to include those activities here.

Have a great week. I’ll be finishing the back of my quilt, doing a little more fall clean up but still  thinking about what happened over those three bloody days in Gettysburg. 🙂

P.S.  I tried posting on my Samsung Galaxy Note 4 for the second time on the road, but again I couldn’t upload photos or save a post. As hard as I find it to thumb my way through a post, I quit after the third attempt. Any WordPress android app advice would be greatly appreciated. 🙂