Posted on September 25, 2015 by Judy@NewEnglandGardenAndThread 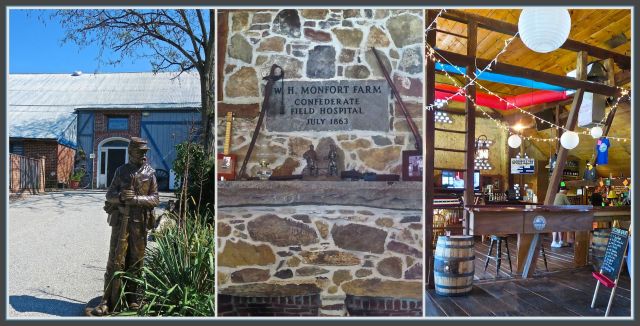 Change? How about a barn going from a Confederate Field Hospital to a brewery.

In Gettysburg, one of our craft beer stops was the Battlefield Brew Works.

We were surprised to see that it was located in a brick-end barn on what was the Monfort Farm from the mid 1800’s.

When the Confederate soldiers retreated over 400 soldiers were left at the farm for almost a month before being moved to another location. Forty-seven men died and were buried on the farm but moved at a later date to a cemetery in Richmond, Virginia.

In 1995, the barn was converted to a brewery, Gettysbrew.  Two years ago, Battlefield Brew Works was born. On a warm afternoon, we stopped and sampled some of their beer. Lincoln Lager was wonderful.

As you walked on some of the original barn floors, you couldn’t help but visualize what had transpired in that building. If only those floors could talk, I think they’d have quite a story to tell us. 🙂