Posted on February 9, 2017 by Judy@NewEnglandGardenAndThread

Welcome to Conway, SC, whose history traces back to the 1670’s when the British settled the area around Charleston. The city’s name has changed throughout the years, but the history remains rich.

Many residents fought in the American Revolutionary War, and General Frances Marion, also know as the ‘Swamp Fox,’ camped nearby on his way to the battle of Black Mingo in 1870.

Front and center in the historic downtown area is its beautiful City Hall, which was built in 1825 and was formerly the Horry County Courthouse. City Hall was designed by Robert Mills, architect of the Washington Monument, and is part of the National Register of Historic Places. 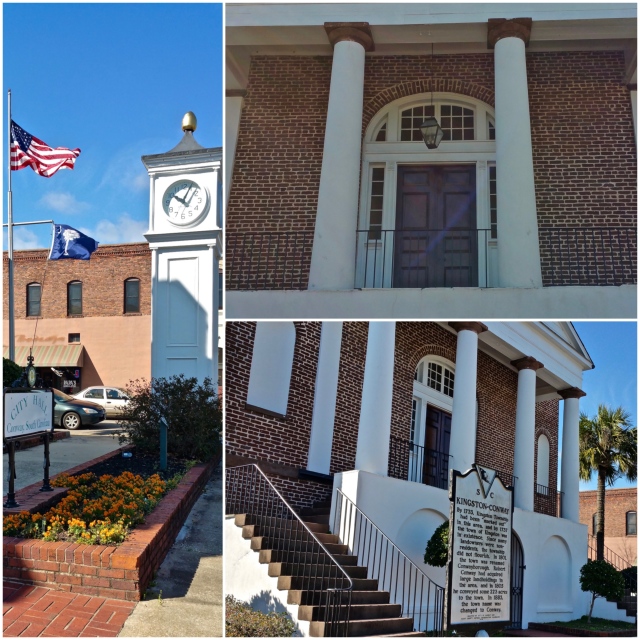 The building is meticulously maintained, and the handsome double doors are dark black when the sun isn’t in your face. 🙂

After walking around the historic downtown, we decided to eat lunch at Groucho’s Deli which opened in 1941. We figured if it had been around that long, it much have good eats, and it did. Pastrami on rye, chicken salad on pumpernickel, pickle on the side, their own brand of potato chips, and their unique sandwich dressing, Formula 45 Sauce™, which was to die for. Well, not exactly, but it sure was good if you like the idea of something like a thin thousand island dressing with sweet pickle relish in it for dipping. No photos, we were too busy eating. 🙂

Happy Thursday, and to those who are in the path of this latest snowstorm, stay safe.

As always on Thursday, this post is linked to Norm Frampton’s Thursday Doors, February 9, 2017.