Posted on October 5, 2017 by Judy@NewEnglandGardenAndThread 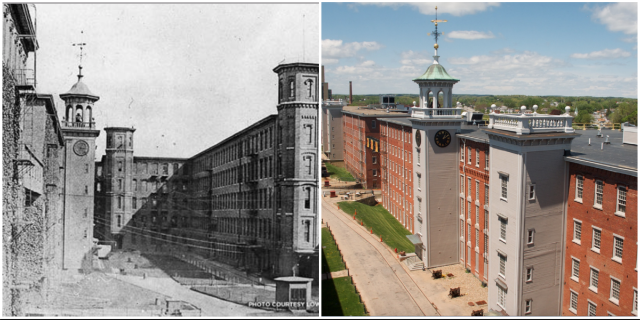 In numerous towns across New England there are mill buildings. We have three here – Cocheco, Sawyer, and Washington. They have been  updated and converted into beautiful lofts, offices, and a variety of businesses.

I saw numerous doors on that afternoon, but this green sliding door in the Wannalancit Mills caught my eye and made me smile. It’s like an old metal barn door. 🙂

As part of the tour, we were able to see the machines in action. Before entering, we were given ear plugs, but the workers weren’t that lucky, and many suffered permanent hearing damage. The work rooms were kept warm and humid so the thread would not break, and with only a sampling of the machines running on one floor, the floors vibrated and the sound was very loud. When the mills were running there would have been three or four floors of machinery running at one time. 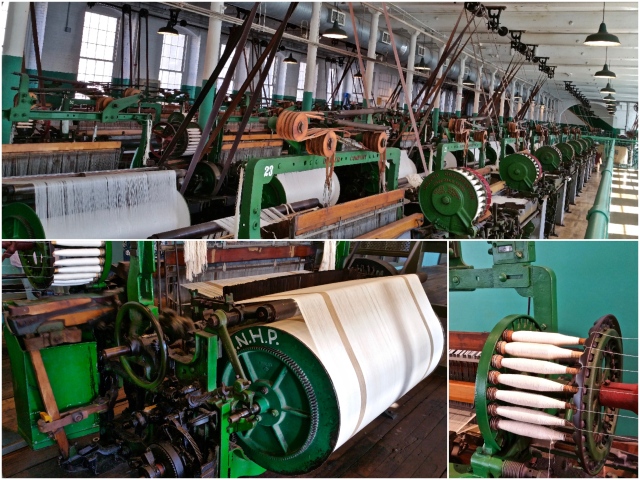 thought they were used on sewing machines. I was amazed to see how they were actually used. I don’t need any more, but I had to buy two tiny ones, 3″ high, called Christmas tree spools.

After exploring the mill, we took a trolley ride to check out the canals and how the water entered the Wannalancit Mill resulting in electricity being created and passed through the pipe running along the ceiling to power the various machines.

Whether you are walking the cobble stone streets or riding in your car around Lowell, you will notice several clocks up high on towers, churches, or buildings. As workers became more savvy about their rights, they requested those clocks to tell when to start and stop work because they didn’t have watches and they didn’t trust the mill owner.

The story of the wealthy New Englanders building the mills, the young women coming in from the farms to work 14 hour days, the success of the mills, the Industrial Revolution, WWII, and the downfall, closure and moving of the work down south is a very important part of our American history.

Several of my family members worked in the mills of New Hampshire and New York. My grandfather built furniture, my aunt made shoes, and my mother, father, and uncle worked in factories that produced men and women’s clothing. I thought of all of them as we toured the mills.

If you are in the area, I’d highly recommend a tour because you will never look at a piece of fabric the same way again.

“Old places, like old people, cannot be relegated to the junk heap simply because of age. Most of them, places as well as people, still have a great deal to say and to contribute if only as a living witness to the past.”
Sara K. Cantor, Lowell Resident, 1966.

Linked to Norm Frampton’s Thursday Doors, October 5, 2017.
I always suggest you visit Norm’s place, but today he has a special post of some amazing doors. Don’t miss them.