Posted on July 24, 2018 by Judy@NewEnglandGardenAndThread

I’ve been growing berries for about ten years now. I’m not an expert, but maybe could be called experienced.

We inherited two high bush blueberry bushes that were very large and highly productive for about five years. Then they stopped producing, and I thought it was lack of sun and pruning. I moved them, pruned them, and they revolted – no growth, no berries so far.

Our schwartenzberry seeds we brought from Kansas grew in a raised bed and produced berries for pies that my husband not only enjoyed but also evoked great family memories. This year due to bad soil and compost mix that I purchased, they were petrified and pitched.

Love strawberries? So, do I, but we can’t grow them due to the chipmunk and squirrel population because they like them too. I tried it year after year. The plants did fine, they fruited, and as soon as the berries remotely started to turn red, they helped themselves to a bite thereby rendering it to compost. Hanging baskets? That just might work, but that would require too much work, watering, and over wintering. 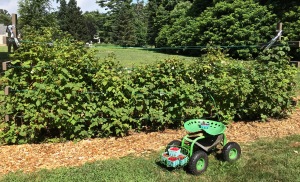 I’ve had to go from giving friends pints and moved up to quarts, but no one has complained.

Today we picked five pints and a half a pint 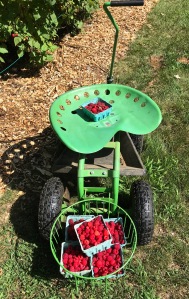 of bruised ones for the chickens.

I don’t know if you like raspberries or if you’ve ever thought about growing them, but let me tell you, they are easy keepers.

Plant them, support them, and once they are done fruiting prune out the dark brown branches. That’s it. The green branches will fruit next year.

I’ve given away eight pints to friends, have five pints sitting in the fridge, 34 pints in the freezer, and that doesn’t even count all that we’ve eaten fresh and on shortcake and in pie.

If you’re in the neighborhood let me know, because I’d be more than happy to share. 🙂